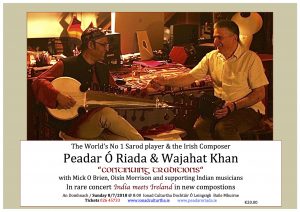 ‘Continuing Traditions’ is an exciting new musical ensemble formed by the world renowned musicians Ustad Wajahat Khan of India and Peadar Ó Riada of Ireland. Based in London and Cork respectively, both artists are among the most leading and revered performers and composers of their respective genres of Indian classical music and Irish traditional music, with an established worldwide reputation. They are also sons of legendary fathers (Ustad Imrat Khan and Sean Ó Riada) and continuing a family tradition of musicianship and composition which have greatly influenced the music of the current generation.

Thus the maestros explore and bond their cultural heritage of musical traditions that evolved in their respective families for many generations in India and Ireland, by fusing together their musical expertise and spirituality and bringing them into the 21st century, through their unique musical collaboration.

A world renowned Sarod virtuoso performer, composer and educationalist, Ustad Wajahat Khan is one of the most accomplished and outstanding Indian classical musicians of his generation.

Based in London and Calcutta, he has performed to great acclaim in over 40 countries worldwide at prestigious venues and festivals, including the Smithsonian (Washington D.C.), Symphony Hall (Berlin), Suntori Hall (Tokyo) and Royal Albert Hall (BBC Proms - London).

Son of the legendary sitar maestro Ustad Imrat Khan, he belongs to the eighth generation of India's revered musical family, which goes back 400 years through a line of celebrated musicians to the courts of Mogul Emperor Akbar in the 16th century. Many lasting contributions over successive generations of Wajahat’s family has profoundly influenced and shaped the course of North-Indian instrumental music up to the present day, which include the evolution of sitar, creation of surbahar (bass sitar), and introduction of the gayeki-ang (vocal-manner of playing instruments).

As an educationalist, he teaches and lectures extensively and has given concerts and workshop courses at eminent institutions such as the Universities of Florida, Maryland, Utica, Amherst and Washington-St Louis in USA; University of Malaysia in Kuala Lumpur; Birmingham Conservatoire, Manchester and Brighton Universities, Yehudi Menuhin School of Music, Trinity College of Music and Middlesex University in the UK. In London, he has been the Founder Director of his own Academy of World Music, and an Artist in Residence at SOAS, University of London. He performs and regularly gives lecture-demonstrations at various educational institutions of Spicmacay throughout India.

Ustad Wajahat Khan has energised the sarod performance repertoire with his revolutionary contributions to the art of sarod playing, and has acquired a faithful worldwide following. His distinctive style and virtuoso technique interweaves a wide spectrum of dhrupad, khayal and thumri (vocal) forms with authentic sarod baaj (repertoire), spanning a full range of feeling and expression.

‘Music at its most spontaneous, vibrant and sensual.’ - South China Morning Post

‘An exhilarating experience. Wajahat’s virtuosity on the sarod can be taken for granted’

‘Breathtaking. You will rarely hear playing that is more focused and intelligent than this.’

Composer, musician and choir director his other interests include film directing and production, bee-keeping, painting, writing, Alternative medicine, culture and traditions of different peoples and history. Believes in the culture of the individual rather than the culture of the masses.

He has lived his life in Cuil Aodha where he raised his family. He founded the traditional University Acadamh Fódhla in 2000, the Irish Cultural trust Iontaoibheas Fódhla in 1999, The international festival Féile na Laoch commemorating Seán Ó Riada (which runs on a seven year cycle) in 2011.

His life’s work is his music. Joined Cór Cúil Aodha 1964 and director since September 1971, He founded the all female choir Cór Ban Cúil Aodha in 1986, The traditional Irish group Triúr (with Martin Hayes and Caoimhín Ó Raghallaigh) in 2008, the traditional group The Drôle (with John Kelly and Eamon McGivney) in 2013 and Continuing Traditions (with Indian classical sarod maestro Wajahat Khan) in 2017. He has been taking his father Seán Ó Riada’s place at the keyboards and directing Ceoltóirí Chualan since 1971. He regularly performs with Seán Ó Sé as a duet. His orchestral work includes concerto for pipes, song cycles and chorale work. He has composed extensively for Cór Cúil Aodha and has accumulated a large body of liturgical and secular works for Male Voiced Choir in the Irish traditional idiom. His compositions for Female choir are polyphonic and include several large works as well as choral arrangements for traditional Irish songs. His traditional Irish Dance music compositions have made their way into the main stream of Irish music and are recorded by many artists in this genre. His work also includes music for films, theatre plays, events, mini operas, solo piano, organ and harpsichord compositions and recordings and experimental works with found sound and electronics. His website is www.peadaroriada.ie